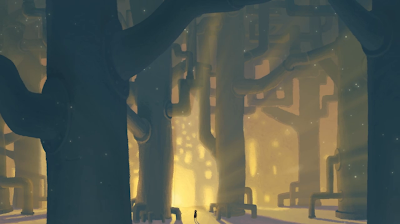 "Jacob Wyatt’s Metro, a student film created with a band of friends at Brigham Young University, has recently been released online after a run on the festival circuit.
The film follows a young girl as she chases a thieving fox through a wondrous underground world. There’s a surprise at the end, but the journey alone is worth the four-minute investment of your time.
Wyatt’s interest in comics is clearly evidenced in his use of panel-like framing throughout the short. The rich palettes and expansive underground settings seem barely contained in the rectangles he uses to pace the action. Like a comic, these panels direct the viewer’s attention while playing with scale, suggesting a world much larger than can be fully expressed on the screen (or the page).
But there’s another side effect of using panels in this particular animation: the panels appear one after the other in a chained sequence that itself echoes the chase playing out on screen. Each time a panel appears, it contains a new surprise in a new area of the screen, just as each turn the girl makes reveals some new spectacle, some new hidden marvel underground as she pursues the elusive fox."
http://motionographer.com/2012/08/27/jacob-wyatt-metro/
Posted by Justin Miller at 8:35 AM